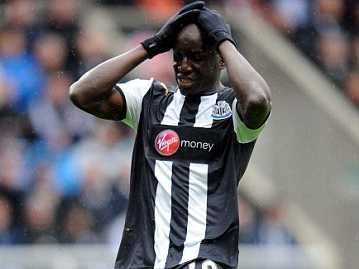 It’s been nine games since Demba Ba found the back of the net in the 2-1 victory against Aston Villa, but is it a real problem?

Not for Alan Pardew, who has backed our leading scorer to get in amongst the goals once more as the season reaches its climax.

Ba has found the back of the net 16 times since he joined the club – not bad when you consider that total was reached by the first week of February, and that there has been an African Cup of Nations in there somewhere. However they have dried up in recent weeks, which is partly due to the fact that Ba has been moved to the left of a fluid 4-3-3 system and isn’t in the same central positions he was in when he was on his hot streak earlier on in the season.

“The first goal at West Brom, Demba must have been a centimetre away from scoring, and when Cisse scored the second goal, he was actually fouled as he was going to score and it fell to Cisse, so he has been a little bit unlucky,” said Pardew.

He continued: “But he is on penalties, he will be in and around the free-kicks and he is working as hard as he has always worked.”

“He is in great form, there’s no lack of confidence. His goal will come and then this will all be forgotten,” Pardew concluded.

I would argue that it’s only Ba’s goalscoring that we’ve been missing in recent weeks, but even then we’ve had Papiss Cisse picking up where Ba left off. In general though Ba’s play and workrate have been fine and, as Pardew hinted at above, Ba has been unlucky on occasion.

The only time I’ve thought he had a poor game was last time out against Bolton, and maybe the game before that against Swansea to a lesser extent. He got subbed in both games and people made a lot of it, especially against Bolton when he reacted poorly to being subbed, but yet again Pardew is unconcerned by events.

Speaking about the substitution against Bolton, Pardew said: “One of those two was definitely coming off and on this occasion, it was Demba.”

“But on another occasion, it will be Papiss, and Demba is big enough and strong enough and bold enough to deal with that. Hopefully against Stoke, he gets the winning goal.”

Personally I think too much is being made of it all. Pretty much every striker goes through a lean spell at some point and right now it is Demba Ba’s time. However his work for the team, both in attack and in defence, has been key to us even if his goals have dried up, so for that reason he stays in the team.

56 thoughts on “Pardew backs Ba to rediscover his scoring touch”