Last week, Eddie Howe announced his ambition to transform Newcastle into an attack-minded, entertaining side as he was unveiled as the club’s new manager.

The former Bournemouth boss – who earned a credible reputation on the South Coast for his attacking brand of football – boldly promised to double down on his philosophy, despite taking over that side that languishes 19th in the table.

Critics have pointed towards the defensive naivety of his Cherries side as a cause for concern but, just as he told Jamie Carragher on Monday Night Football back in 2019, Howe has no plans to change his identity anytime soon.

“I’m not going to come here and be a different manager,’ he declared to the press upon arrival.

“It’ll take gradual steps but my training will certainly be very different and, ultimately, I want to see the type of football that entertains.

“I think that’s what Newcastle fans want too.”

His predecessor, Steve Bruce, was often criticised by Toon fans for being too cautious.

Howe has pledged to be the opposite, but will that correlate to a winning formula on the pitch?

What do the stats say about the new man in the dugout at St James’ Park?

Their respective records as managers might take you by surprise…

The new Toon boss has an edge over Bruce when it comes to overall win percentage, but those figures are skewered by Howe managing the overwhelming majority of his games outside of the top flight.

By solely looking at their Premier League records, you can see that Howe’s win percentage drops to an almost identical level as Bruce’s.

While results on the pitch may have been similar, the perceived philosophy of both managers are laid bare once the numbers are scrutinized further.

However, alarm bells may start to ring for Toon supporters when they compare defensive stats between the two.

Newcastle have already conceded 24 goals in 11 games so far this season – the second-worst defensive record in the league.

Hope of Howe shoring up a leaky Magpies backline may diminish when you see that his Cherries side conceded a whopping 330 goals throughout his five years in the top flight… a staggering 1.74pg!

That compares to the 654 Bruce has conceded as a Premier League manager (1.37pg).

Howe needs to hit the ground running if he wants to have a positive impact on the only club out of England’s 92 professional teams yet to win a game this campaign.

Prominent Bournemouth fan Tom Jordan, host of the AFCBpodcast, outlines exactly what Toon fans can expect from day one.

“Newcastle can expect a fitter group of players”, he said.

“Initially he’ll have to work with what he’s got, no magic wand but he’ll certainly make them fitter.

“At Bournemouth we always covered a hell of a lot of ground. He’ll get the fundamentals and basics right then develop from there.”

The Cherries earned plaudits for their exciting, gung-ho style when they were initially promoted from the Championship, similar to the praise that Marcelo Bielsa’s Leeds side received for their efforts last season.

As the table below shows, Howe achieved Bournemouth’s highest ever league finish in the 2016-17 campaign when he led them to ninth spot, a heroic feat for a club that was crippled with debt and facing relegation to the Conference in 2009.

He consistently managed to keep them punching above their weight for four years in the Premier League. However, his final season in charge saw a dramatic drop off; not only in points but in goals scored, possession and shots per game – metrics Howe usually prides himself on.

44% possession is a negative outlier for Howe’s side, but that figure is still 1% greater than anything Newcastle have achieved over their last five seasons in the top flight.

The style that the new Magpies manager will look to impose is evident when looking at the graph below, with Newcastle averaging an abominable 37% so far this campaign – the worst in the division. 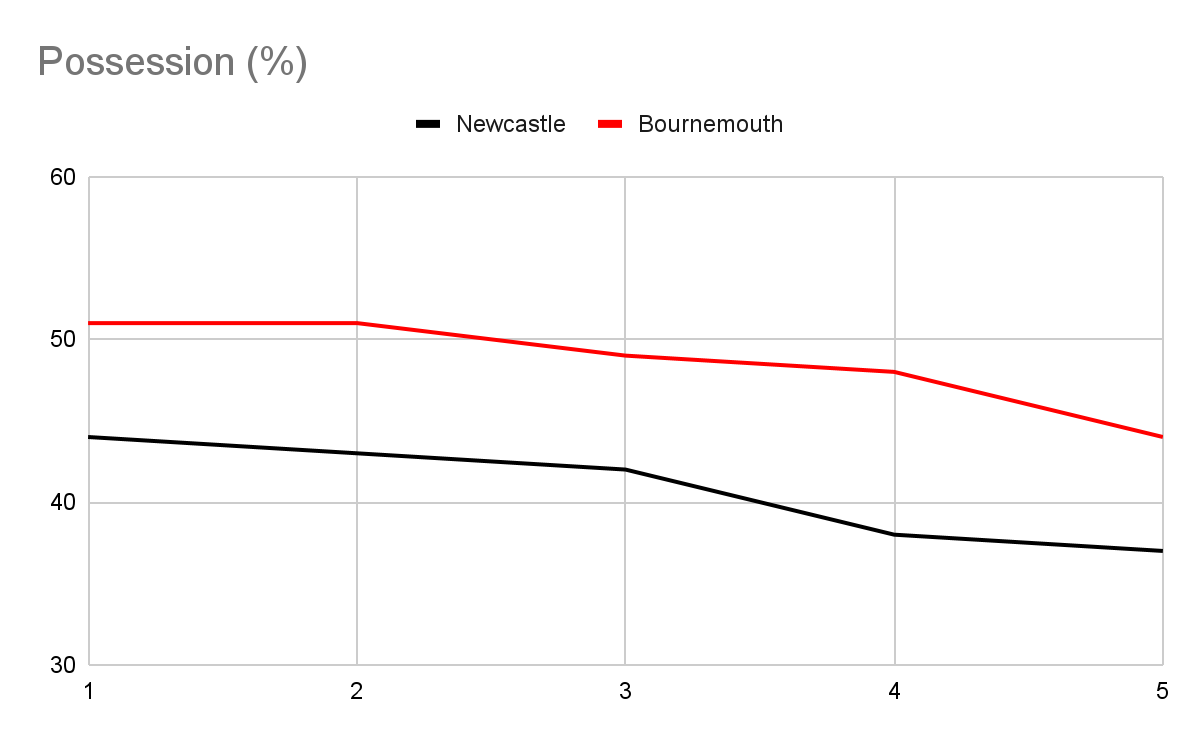 (Season 5 is the most recent that each side has had in the Premier League. In Newcastle’s case, it is the current campaign.)

We know a lot about Howe’s style, but what about his substance?

Newcastle have tinkered with both a back four and a back five this season, with neither working to great effect as a fragile defence has shipped in goals while the forwards – Callum Wilson aside – have struggled.

Bournemouth expert Jordan was on hand once again to tell us what the Toon Army can expect from a tactical point of view.

“On paper 4-4-2 was always our go-to system, but he’d constantly adapt that depending on the fixture ahead.

“One of the two frontmen would be more of a ‘number ten’… I’d expect to see someone behind Callum Wilson.

“Many described his Bournemouth side as ‘naive’ but I personally saw it as more ‘brave’ rather than naive.

“It was exciting to watch, and the one season we tried to deviate away from it somewhat and be ‘harder to beat’, was the season we went down.”

Many thought Jonjo Shelvey would be an early casualty under Howe, with the England international not ascribed to the “energetic midfielder” mould that Jordan talks about.

Howe surprised fans when he singled the midfielder out in his presser ahead of today’s crucial clash with Brentford.

“I knew how good he was having played against him.

“But then when you work with him you realise he’s an incredible technician and can play all sorts of passes, long & short.

“In terms of our philosophy he’s someone who’ll be very important to us.”

The stats back Shelvey up, too. In the last 12 months, Newcastle have played 43 times in the Premier League, winning just once in 17 games without their vice-captain in the starting line-up.

Compare that to the 26 games he has featured: the Magpies have won nine, drawn five and lost 10, averaging almost a point a game MORE than when he is absent from the side.

These players had been shunned by Bruce but will now have a new lease of life under Howe, with all three fitting the bill for his attacking, possession-based doctrine.

The trio have been on international duty for the bulk of Howe’s 10-day tenure so may not be in the frame for Brentford, but don’t be surprised to see them become first-team regulars in the near future. 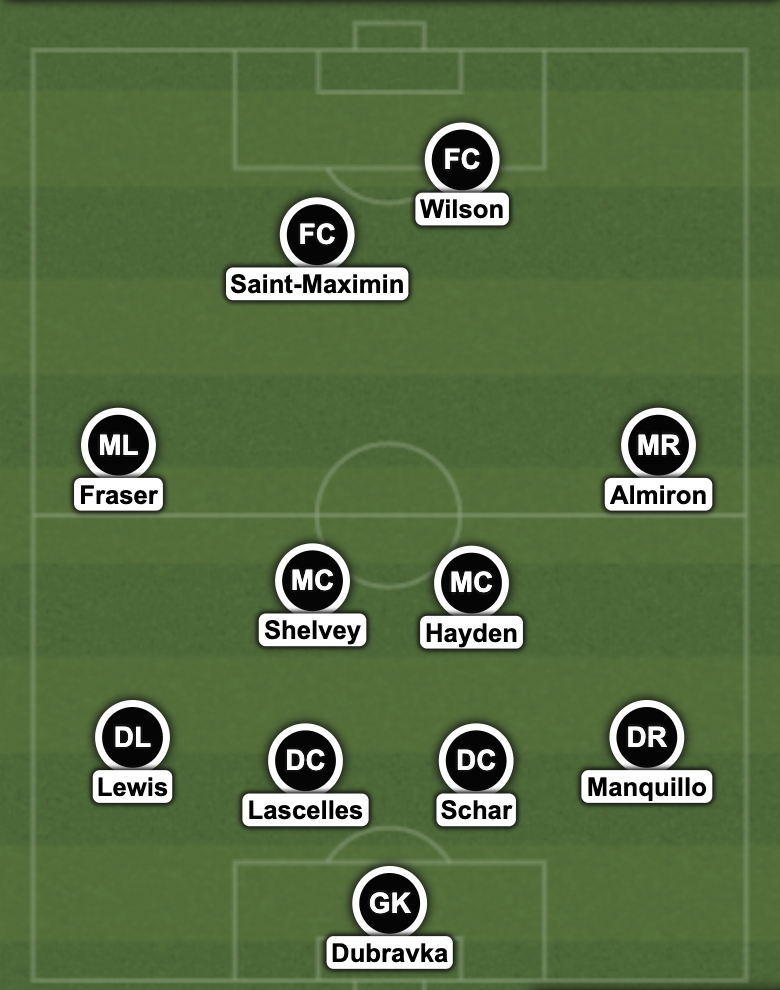 (A look at how Newcastle could possibly line-up in the coming weeks while adopting Howe’s favoured 4-4-2, double 6 formation.)

And in the transfer market?

Howe earned recognition for his ability to unearth a gem while operating in the lower leagues, preferring to sign a player with a point to prove and coach them into the finished article.

Nathan Ake, now of Man City, is a fine example, who spoke to the Daily Record about Howe’s methods in 2019: “He’s a very good manager, that’s how he is every day with his attention to small details.

“He tries to make people better every day and takes time to develop each player personally.”

Newcastle’s new-found wealth is well-documented, with the completion of last month’s Saudi-backed takeover making them the richest club in world football.

Being backed by swathes of money is a situation Howe has never been in before. The last time he was given funds in the Premier League, a lot of it went to waste on the likes of Jordan Ibe, Jefferson Lerma and Dominic Solanke.

Can Howe handle the Saudi Arabian heat once the market opens in seven weeks time? How may he approach his first window as Newcastle boss? Will he look to bring in a “superstar” signing?

“Most of Eddie’s signings were UK-based but I don’t necessarily believe that’ll be the case with Newcastle,” he added.

“At Bournemouth he was limited due to the size of the club. He chose to sign players who were hungry to improve and, most importantly, would fit into his system.

“That won’t be a problem at Newcastle and I expect he’ll address the recruitment side of things accordingly. 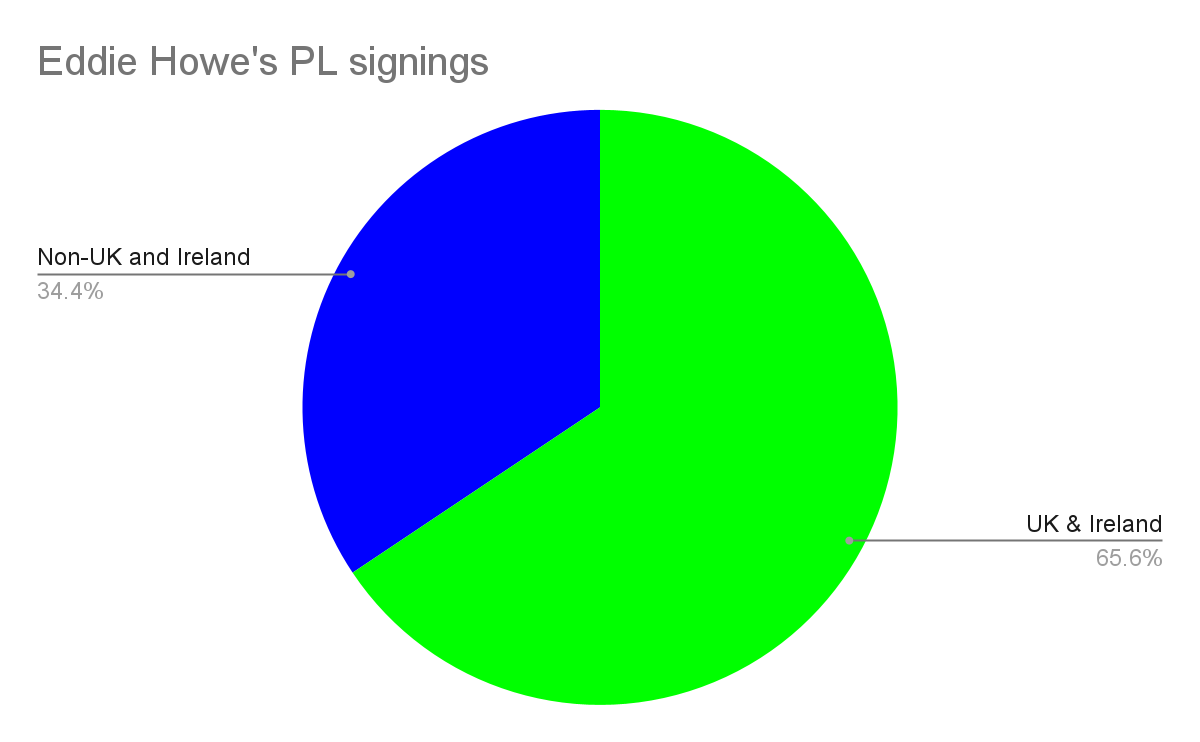 (A staggering 65.6% of Howe’s Premier League signings at Bournemouth were homegrown.)

Short-term success for Howe will be determined by Newcastle’s final league position at the end of the campaign.

Top flight survival is the ultimate goal for the Magpies right now, with 27 games left to save their season and prevent themselves from ironically being labelled the richest club… in the Championship.

Stay positive, Toon fans, as the Bournemouth expert has one final message for the fanbase.

“I am convinced Eddie Howe will be a success at Newcastle,” Jordan said.

“He’s intelligent, meticulous about his work, and has experienced a lot for such a young manager in the game.

“Short-term he’ll get the current group grafting and I am certain Newcastle will stay in the division. After that, it will be fascinating to see. It’s a new sort of project for Eddie, but you’re in safe hands.

“I’m a Bournemouth fan who saw this young lad keep us up with -17 points in League Two, gain promotion the following season with a transfer embargo, and somehow end up in the Premier League for five seasons.